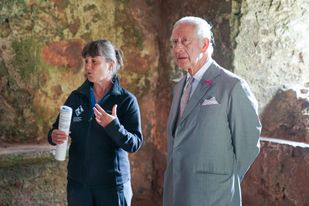 HRH The Prince of Wales marks three anniversaries with St Govan’s Chapel visit
--
His Royal Highness The Prince of Wales visited St Govan’s Chapel near Bosherston today as part of a series of engagements throughout the country celebrating Wales Week 2022.
The visit to St Govan’s marked the 70th anniversary of the Pembrokeshire Coast National Park, the 10th anniversary of the Wales Coast Path and the 200th anniversary of HM Coastguard
After being greeted by Miss Sara Edwards, Lord-Lieutenant of Dyfed and the Chairman of the Pembrokeshire Coast National Park Authority, Cllr Di Clements, The Prince of Wales took a tour of the 800-year-old sanctuary and its Holy Well, guided by Lynne Houlston, National Park Ranger for the Military Estate.
This was followed by The Prince of Wales meeting with Park Authority officers discussing innovative Coast Path cutting machinery and highlighting the vital conservation work undertaken to protect the Pembrokeshire Coast National Park.
Cllr Di Clements said: “It was a privilege to welcome the Prince of Wales to one of the most dramatic stretches of the Pembrokeshire Coast during this landmark 70th anniversary year.
“Already a sanctuary for many plants and animals that have disappeared from other parts of the UK, the Park also became a place of sanctuary for many people during the recent pandemic.
“While every part of the Pembrokeshire Coast has its own unique qualities, the Castlemartin Range is special in that it shows how military activity, history, wildlife conservation and public access can all work together.”
During the visit, introductions were also made to representatives from Natural Resources Wales, who manage the Wales Coast Path, and were present to recognise ten memorable years of this remarkable resource.
Clare Pillman, Chief Executive of Natural Resources Wales said: “The Wales Coast Path and our National Parks form an integral part of our national identity, encouraging hundreds of thousands of visitors to take a step beyond the nation’s traditional visitor attractions each year and to explore everything Wales’ spectacular expanse of coastline and countryside has to offer.
“Celebrating its 10-year anniversary this year, the Wales Coast Path will be one greatest legacies that we leave for future generations. From towering puffin-populated clifftops to world-renowned historical and cultural landmarks, the Path has made space for nature and people, providing a place to rest and relax as well as offering some of the very best destinations for bracing, energetic walks.
“We are proud of the role we have played in bringing the Path to life over thelast decade, working closely with communities and partners like Pembrokeshire Coast National Park Authority to showcase all it has to offer. We extend our warmest congratulations to Pembrokeshire Coast NPA today as they mark their own special 70th anniversary. NRW looks forward to continuing this important partnership work over the years to come and are delighted to play our part in the celebration of these special milestones at St Govans alongside The Prince of Wales today.”
Representatives from HM Coastguard were also present to meet with The Prince of Wales, reflecting 200 years of service. Tom Larkin, Senior Coastal Operations Officer for St Govan’s, said: “It was an honour to be put forward as a representative of HM Coastguard, alongside St Govan’s Station Officer Paul Culyer and Deputy Station Officer Gregg Hayes, who joined me in welcoming The Prince of Wales.
“We are extremely proud of reaching our two-hundred-year milestone and were delighted to have the chance to share a little of that history.
“Volunteers and staff alike are an integral part of the past two centuries, and each coastguard officer carries with them a proud legacy of many lives saved.
“It means a lot that The Prince of Wales recognised our contributions as a team and as an organisation.”
Introductions were also made to those who play a part in the history and management of the Castlemartin Estate.
In recognition of the Park Authority’s long-standing involvement with The Duke of Edinburgh Award, The Prince of Wales was also invited to meet with Authority officers past and present involved with the Award scheme.
At the end of the visit, Chair of the Park Authority, Cllr Di Clements presented The Prince of Wales with a specially commissioned print of St Govan’s Chapel in the style of the Authority’s award-winning range of traditional retro posters, framed with Pembrokeshire Oak.