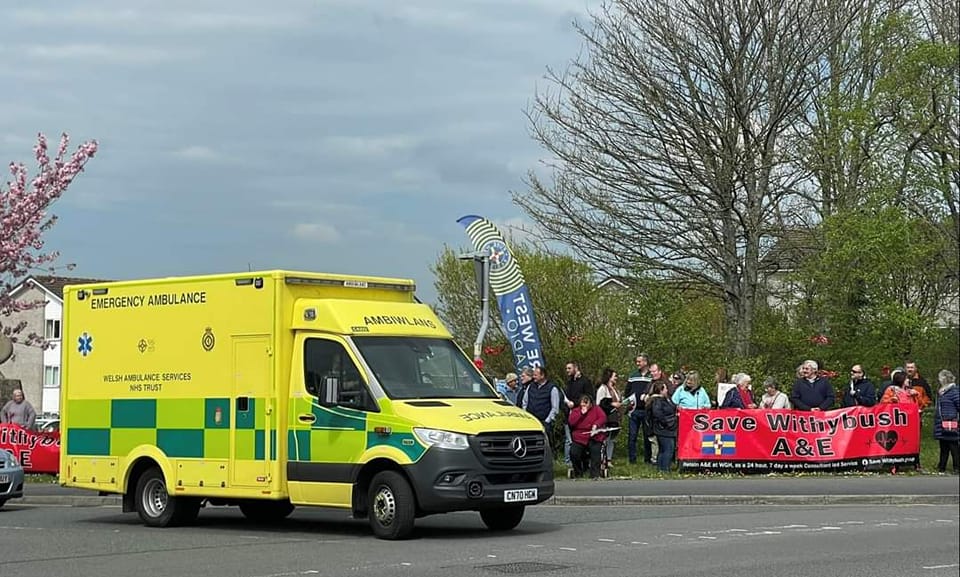 Hywel Dda has ‘misled public’ over consultation findings” say Withybush Campaign following release of new research paper.
--
Campaigners say that the Save Withybush campaign will now take a ‘march forward’ as evidence shows that Hywel Dda has misinterpreted the findings of its own consultation in 2018 and has misled the public over its data.
Following a full debate about the Save Withybush A&E petition in the Senedd last week, the petitions committee has requested further evidence from the camapign for their next meeting on monday July 11th.
A new campaign named ‘Our NHS - Born in Wales’ was recently launched by the People’s Assembly Wales and their volunteer researchers are supporting the Save Withybush campaign.
The researchers have scrutinised the Health Board’s report on the 2018 consultation regarding proposed new hospital plans and believe that Hywel Dda has misled the public over its findings.
They have produced and submitted a further evidence paper to the Senedd petitions committee which they say shows “Hywel Dda have ignored the concerns of residents, ignored the data which showed an overwhelming rejection of the proposed new hospital plans and have ploughed ahead with changes. This is in spite of clear evidence which showed that the majority of people who would be most affected by the proposed changes were not in support of any of the proposed changes”.
Campaigners added: “Our further evidence paper is a damning indictment of Hywel Dda’s actions to date.
Not only have they misled the public over the findings of their 2018 consultation, they have completely ignored the concerns of thousands of residents and have bulldozed ahead with their proposals knowing full-well that they are acting against the wishes of a significant cross section of the public.
We believe that it is now only a matter of time until the Health Board will be forced to go back, fully involve residents in addressing the concerns raised and engage properly in co-production as they are duty bound to do under the Well-being of Future Generations (Wales) Act 2015.
They did not ask the right questions in their consultation, and the questions they did ask were heavily weighted in order to steer the data towards their preferred outcomes. This was not co-production and the Health Board now have no other option but to go back and ask different questions in a completely different way, based on the data they have recorded so far.”
“As campaigners we believe that the Health Board is now fully exposed on this issue and we will be pursuing this through every avenue with our latest findings marking a “turning of the tide” for the campaign. Pointing out that the Withybush issue is now under much greater scrutiny at Welsh Government level following the debate.
“The Health Board often cites ‘recruitment issues’ as one of the reasons for their proposed changes and removal of services at Withybush. However our argument, as evidenced in our paper, is that given the level of uncertainty that has surrounded health services within the hospital for so long, the Health Board has actually created the very recruitment issues which they are using to justify changes.
This was cited in their own 2018 report ‘our Big NHS changes’ where staff focus groups actually said:
‘people won’t come to work here Big NHS changes’ where staff focus groups actually said:
‘people won’t come to work here because there has been so much uncertainty around the hospital over recent years’ (p.10)
They have essentially run down the hospital and are now trying to use that as an excuse to remove the A&E”
“This has become a ‘war of attrition’ over Withybush, in which the Health Board has demoralised the public, wearing them down over time by pressing ahead with changes whilst ignoring our concerns.
It’s understandable that some Pembrokeshire residents, including County Councillors have given up hope for Withybush. However, as a campaign and armed with new evidence, we feel that we can finally put the health board on notice.
This is far from over or a ‘done deal’ as they repeatedly assert. Notably, in her speech in the Senedd last week Eluned Morgan used the word ‘if’ several times in regards to a new hospital. This shows that the Welsh Government may already be positioning itself to abandon these dangerous plans if we keep up the pressure as a campaign and as a county.
With model motions in support of the Save Withybush campaign going to Town & Community Councils, trade union branches as well as a motion going through County Council, we believe we can reinvigorate people’s hope for the survival of Withybush and inject fresh impetus for action to save our hospital. But we re-issue our call for action to everyone to step up and save the hospital.
With this week marking the 74th birthday of the NHS we encourage all in Pembrokeshire and beyond to demand decent, safe, and localised services, and importantly, to demand services which are provided based on health need, as was intended when the NHS was founded back in 1948.
A full copy of the Further Evidence paper is available to read on the Save Withybush Campaign Facebook group.