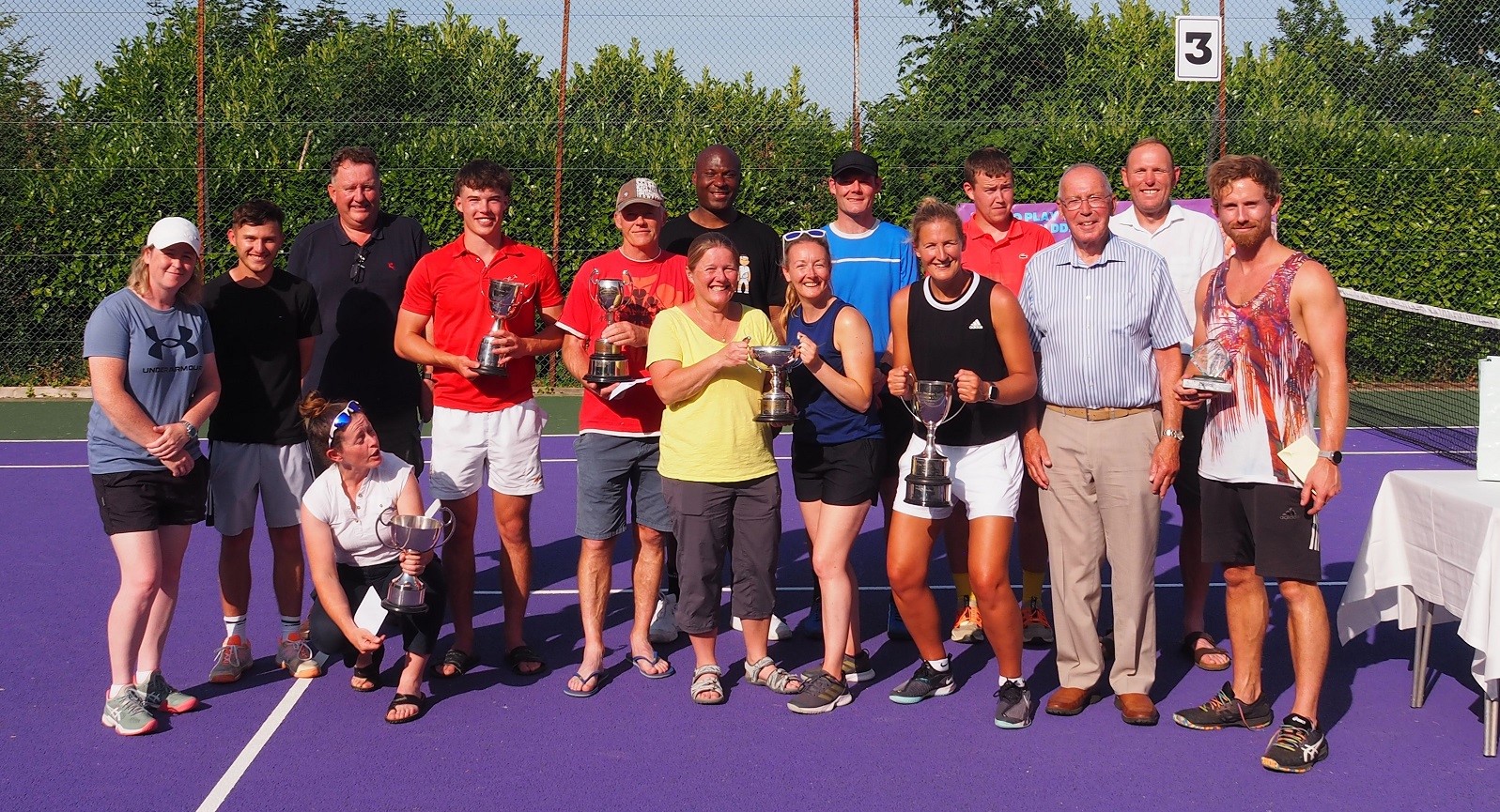 The 72nd annual Pembrokeshire Junior and Senior County Open Tennis Tournament
Mathieu Evans was the big winner at the annual Pembrokeshire County Open tennis tournament.
The 19-year-old, making his debut in the senior draw, defeated last year’s champion Jeremy Cross in a scintillating men’s singles final at The Parade on Saturday 16 July.
The crowd were brought to their feet as Evans clinched match point in a championship tie-breaker to dethrone Cross, who played his part in what Haverfordwest Tennis Club president Brian Hearne hailed the greatest men’s final he has ever witnessed in his 63-year involvement.
Evans went on to claim further silverware with dad Bruce, a veteran of the tournament, in the men’s doubles, triumphing over Carmarthenshire duo Danny Cobinah and Lewis Thomas.
Kerry Williams reclaimed the ladies singles title she won back in 2019 defeating last year’s finalist Sarah Newman, who was consoled by defending the women’s doubles title with recent Four Nations champion Laura Davies. The pair edged Williams and partner Michelle Morgan in another tense championship tie break.
Cross, a current Wales Senior Open champion, went on to defend his mixed doubles title with Ceri Coleman-Phillips. Together they defeated Newman and Pete Warren Lavis, who beat Nathan Jones earlier in the day to take home the men’s plate.
The junior tournament was also a huge success this year and ran alongside the senior competition.
Robbie Stirling defended his boys under 12s singles title, while Phoebe Johnson was the girl’s age group winner.
Eddy Brown and Josie Hawke won the boys and girls under 14s singles competitions, with Hawke adding the under 16s trophy to her collection. Etienne Hole edged an entertaining boys under 18s final.
In the doubles there was more silverware for Stirling, who claimed the under 12s boys title with Gethin Frank, while Fynn Price and Shaun Bolger were the under 14s champions.
The tournament was once again refereed by club coach Tom Hole with 79 players taking part over the fortnight.
Haverfordwest Tennis Club chairman Dean Richards thanked Hole and his right-hand woman Sarah Keogh for all their hard work, plus a small group of volunteers who worked tirelessly to ensure the competition ran smoothly.
“Finals day was a huge success, the Parade was buzzing with excitement with family and friends cheering on competitors,” said Richards.
“Thanks to all the participants for entering, and a special mention to those players who travelled from as far as Neath to take part.
“The planning has already begun for next year.”
Results in full
Men’s singles: Mathieu Evans beat Jeremy Cross 6-3 4-6 1-0
Ladies singes: Kerry Williams beat Sarah Newman 6-1 6-0
Men’s doubles: Mathieu Evans and Bruce Evans beat Danny Cobinah and Lewis Thomas 6-3 6-2
Ladies doubles: Laura Davies and Sarah Newman beat Kerry Williams and Michelle Morgan 6-2 2-6 1-0
Mixed doubles: Jeremy Cross and Ceri Coleman-Phillips beat Pete Warren Lavis and Sarah Newman 7-6 6-2
Men’s plate: Pete Warren Lavis beat Nathan Jones 6-3 6-1
Under 18s boys: Etienne Hole beat William Phillips 6-1 7-5
Under 16s girls: Josie Hawke beat Honey Johnson 4-0 4-2
Under 14s boys: Eddy Brown beat Ned Rees Wigmore W/O
Under 14s girls: Josie Hawke beat Anna May 4-2 1-4 1-0
Under 12s boys: Robbie Stirling beat William Cross 7-6 0-6 1-0
Under 12s girls: Phoebe Johnson beat Isabelle Owen 4-1 4-0
Under 14s boys doubles: Fynn Price and Shaun Bolger beat Eddy Brown and Ben Brown 4-6 7-6 1-0
Under 12s boys doubles: Robbie Stirling and Gethin Frank beat Ethan James Scale and Sidak Mahey 6-0 6-1