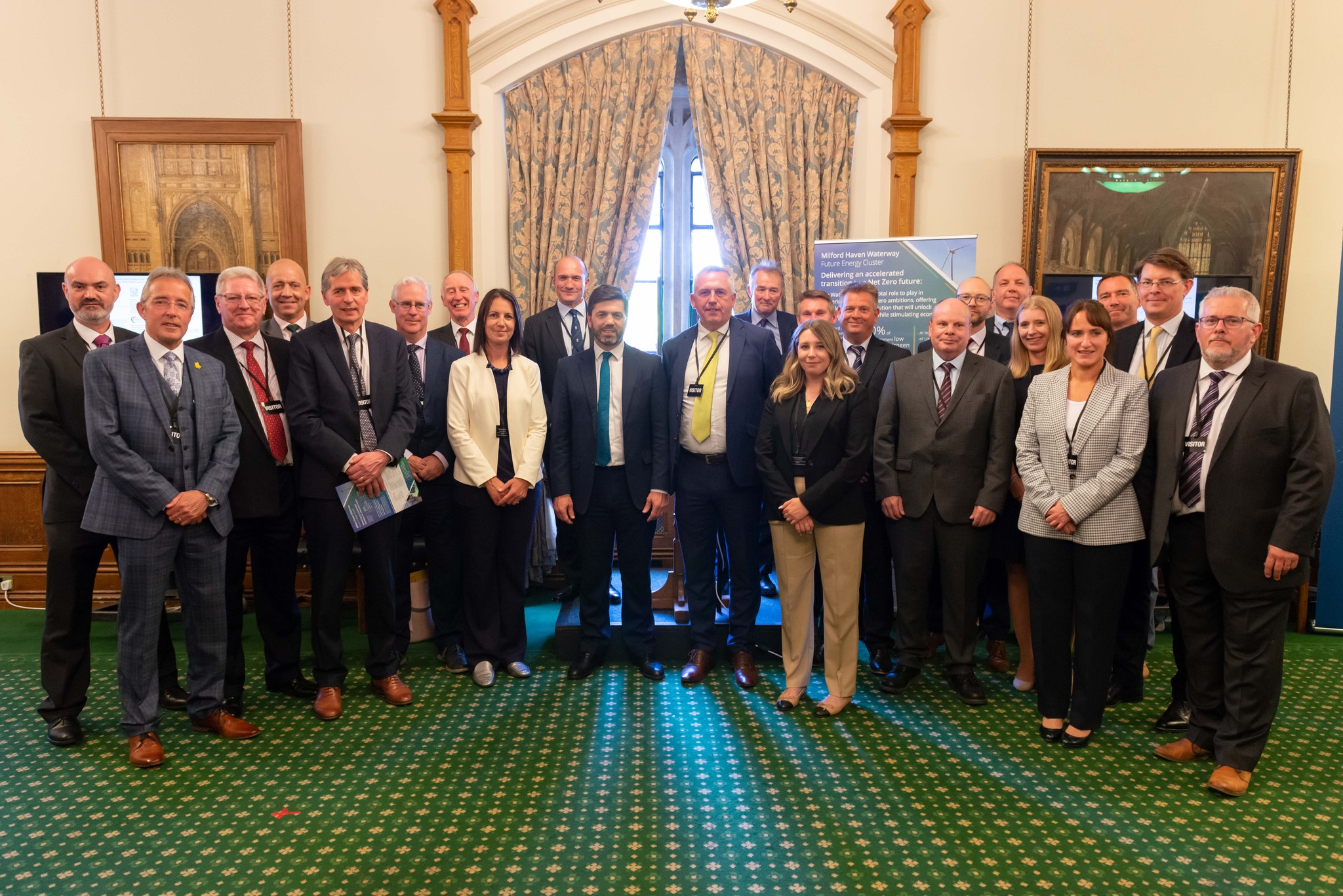 UK’s Energy Capital Maps Out Low Carbon Vision
--
The Milford Haven Waterway Future Energy Cluster, which supplies 20% of the UK’s annual energy demand, maps out a vision to drive a 30 year multi-billion pound investment platform to deliver a secure, resilient, low carbon future.
The Milford Haven Waterway Future Energy Cluster, representing the UK's energy capital, has outlined a vision for a low carbon future at the first of two events planned this year.
At a Westminster launch event on 14th June hosted by Preseli Pembrokeshire MP Stephen Crabb, the Cluster – a coalition of energy companies, renewable developers, green technology innovators, Pembrokeshire County Council and the Port of Milford Haven – outlined how it will play a pivotal role in delivering the UK’s Net Zero ambitions through continued investment and evolution over the next 30 years.
A second event later this year will see the vision outlined at the Senedd alongside Welsh Government Ministers, Senedd Members and Welsh industry leaders.
During the reception in the House of Commons, the Cluster outlined a pathway to support at least 20% of the UK's hydrogen production and 10% of Floating Offshore Wind (FLOW) targets, which were outlined in the recently published British Energy Security Strategy. Continued utilisation, adaptation and innovation in the Haven will also support the development of low carbon liquid fuels, CO2 shipping, marine renewables and energy storage.
The Milford Haven Waterway Future Energy Cluster also demonstrated to government, political and industry representatives how its whole energy cycle solution has a pivotal role to play in supporting an accelerated transition while stimulating substantial economic growth.
Early economic analysis undertaken for the Cluster by Cardiff Business School indicates that its vision could add an additional 3,000 Welsh jobs to the 5,000 already supported by the Milford Haven Waterway energy sector.
To deliver this vision and unlock substantial international private sector investment, the Cluster called on the UK and Welsh Governments, National Grid, The Crown Estate and OFGEM to support the future success of this critical national energy asset by:
Expanding South Wales’ Grid capacity by 10GW by 2030
Implementing a fast-tracked consenting regime
Backing a South Wales Green Freeport bid
Introducing mechanisms to de-risk the Celtic Sea FLOW opportunity
Backing a South Wales FLOW infrastructure bid
Supporting the Milford Haven Waterway SuperPlace ambition, including both blue and green hydrogen
Supporting prioritisation of South Wales in National Grid’s Project Union
Supporting a BEIS Cluster Sequencing Track 2 bid
Incentivising the production and use of low carbon fuels
Backing Skills Accelerator and Supply Chain Accelerator programmes.
Speaking on behalf of the Haven Waterway Future Energy Cluster, Tom Sawyer, CEO at the Port of Milford Haven, said:
“By the 2040’s the Milford Haven Waterway aims to be a significant exporter of low carbon electricity and hydrogen, and a globally recognised example of a low carbon, smart energy system fully capable of supporting society’s energy needs reliably, cost effectively and with significantly reduced emissions.
We’re proud to be working collaboratively as part of the South Wales Industrial Cluster (SWIC) and the Celtic Sea Cluster (CSC). Our collective vision will not only contribute significantly to the country’s Net Zero goals, but it will create around 3,000 Welsh jobs, boost pay and productivity, create new and exciting career opportunities and improve living standards for the people living and working in our region: today and for future generations.
We’re delighted to have had the opportunity to share our vision in Westminster and look forward to our next launch at the Senedd.”
Rt Hon Greg Hands MP, Minister for Energy, Clean Growth and Climate Change, welcomed the Cluster’s vision, saying:
“From floating offshore wind to hydrogen, the Milford Haven Waterway Future Energy Cluster will bring thousands of jobs and growth to South Wales. This will cement the region’s position as a leading player in delivering clean, affordable, home-grown energy for Britain.”
Rt Hon Simon Hart MP, Secretary of State for Wales, said:
“It’s fantastic to hear the ambition for the future of the Milford Haven Waterway. The Waterway is already vital to the prosperity of south west Wales and the UK energy supply and now there’s potential to transform it into a vital player in our energy future.
These plans will secure jobs, contribute to our net zero ambitions and reduce our reliance on foreign energy supplies, all of which are at the heart of the UK Government’s ambitions for the people of Wales.”
Rt Hon Stephen Crabb MP (Preseli Pembrokeshire), said:
“It was great to welcome so many of the key players in our local energy sector to Parliament today. With its energy-rich heritage, and strategic national importance, the Port of Milford Haven is well-placed to be at the forefront of the transition to a low carbon future.”
“This ambitious vision will bring a whole host of benefits both nationally, and locally, not least through the creation of high skilled green jobs and apprenticeship opportunities for the people of Pembrokeshire.”

Vision Arts is offering young people aged seven to 18 the chance to enjoy a musical-theatre themed summer of fun, thanks to support from Welsh Government and Pembrokeshire County Council’s Play Department..

More than £100,000 available to local projects via Sustainable Development Fund

A new round of grant support has opened for projects based in and around the Pembrokeshire Coast National Park that reduce local carbon emissions and respond to the climate emergency.

Grwp Resilience are enjoying the fruits of their labour this summer thanks to Pembrokeshire Agricultural Society making land available to the group of local Haverfordwest residents for the production of fresh fruit and vegetables as part of a Community Garden. The Society believes it is the first in the UK to take on such a project.

Support for people with type 2 diabetes

People with Type 2 diabetes are being offered the chance to participate in a six-week long programme that will help them manage their condition.

Young People urged to have their say on policing matters

Young people in Carmarthenshire, Pembrokeshire, Ceredigion and Powys are being encouraged to ensure their voices are being heard on policing matters by applying to become members of PCC (Powys Police and Crime Commissioner) Dafydd Llywelyn’s Youth Forum.

Campaigners determined to save the A&E at Withybush hospital have announced that they will be ramping up efforts to engage local support for the hospital in the run up to the Senedd debate, which is to be held on Wednesday June 29.

Popular food delivery service Wiltshire Farm Foods has been hit by a cyber attack which has caused problems with deliveries.