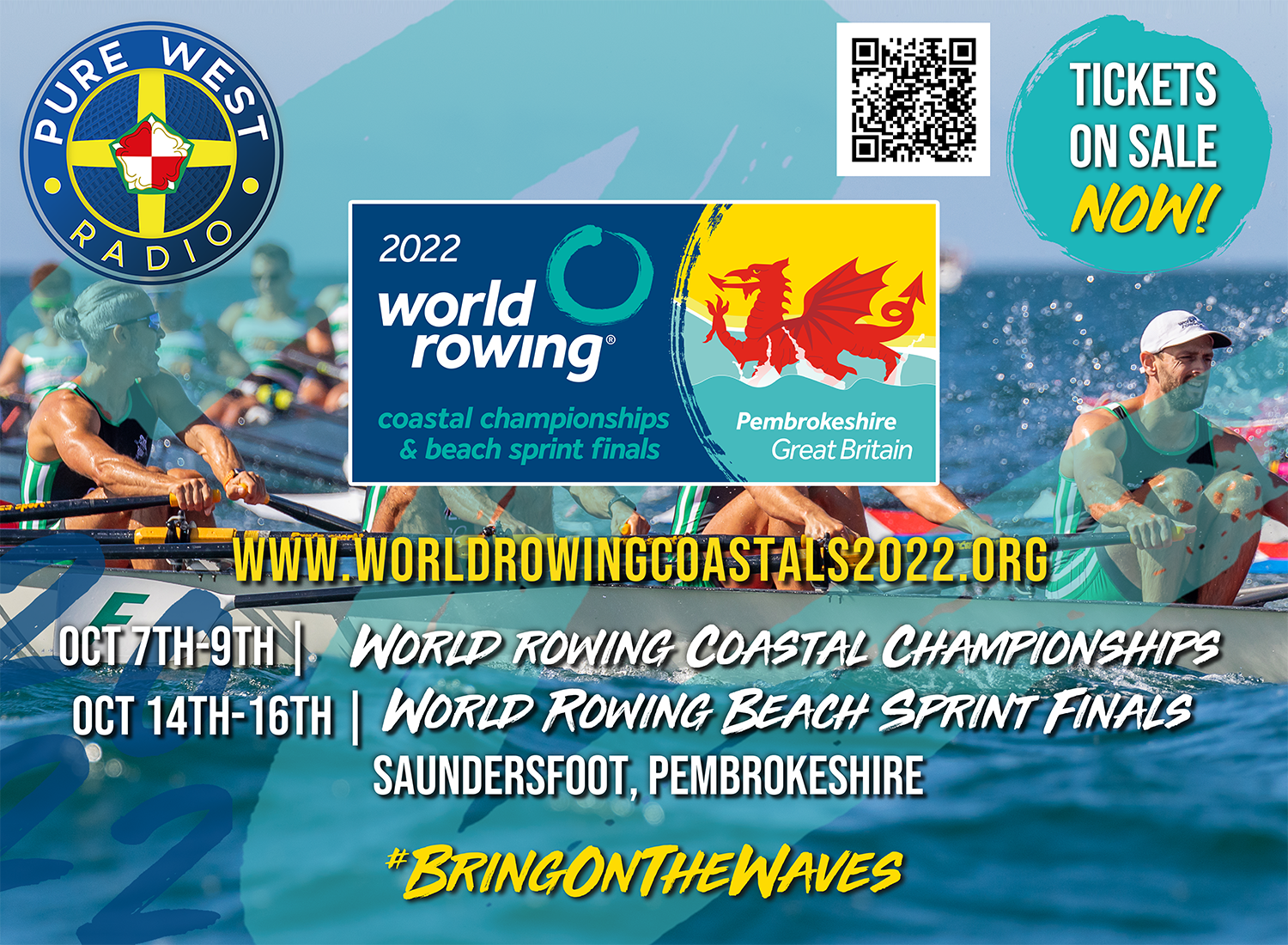 BRING ON THE WAVES : ENTRIES ANNOUNCED FOR THE 2022 WORLD ROWING COASTAL CHAMPIONSHIPS AND BEACH SPRINT FINALS SHARE
--
The 2022 World Rowing Coastal Championships and World Rowing Beach Sprint Finals get underway next week in Saundersfoot, Pembrokeshire, Great Britain. Coastal Rowing has grown in popularity in recent years and as a result, entries have been coming from all over the world – and feature again a good mix of Olympians and experienced coastal rowers.
The World Rowing Coastal Championships will take place from 7 to 9 October in Saundersfoot. The event has attracted over 540 rowers from as far away as New Zealand, Peru, Japan and the United States.
The Men’s Solo has attracted 44 entries and sees the return of 2019 World Rowing Coastal Champion Adrian Miramon Quiroga of Spain. Miramon will face some well-known names on the international scene, such as Joel Naukkarinen of Finland or Simone Martini of Italy. Don’t count out Ronan Byrne of Ireland – he is a former silver medallist at the World Rowing Championships and hasn’t raced internationally since the Tokyo Olympic Games.
The British have put together a Men’s Coxed Quad with no less than four Tokyo Olympic finalists. Jacob Dawson and cox Henry Fieldman won a bronze medal in the Men’s Eight in Tokyo, while Matthew Rossiter and Ollie Cook were Olympic finalists in the Men’s Four. They will be joined by British national team member Richard Clarke – that crew will surely be the heavy favourite to win it all.
With the absence of reigning champion Stefania Gobbi of Italy, the Women’s Solo could be a battle between the silver and bronze medallists from last year, Diana Dymchenko of Azerbaijan and Jessica Berra of France. Other names to watch includes Monika Dukarska of Ireland, Sarah Pidgen of Canada and Agnieszka Kobus-Zawojska of Poland.
Following the World Rowing Coastal Championships, the World Rowing Beach Sprint Finals will be raced from 14 to 16 October at the same location. The event debuted in 2019 and will, for the third edition, have just under 250 athletes from 26 nations doing the short course, beach start style race.
For the Women’s Solo, all eyes will be on Rio 2016 Olympic Champion, Helen Glover of Great Britain, and Tokyo 2020 Olympic Champion, Emma Twigg of New Zealand, both making their debut on the international Coastal rowing scene. They will face other Olympians, such as Monika Dukarska of Ireland or Agnieszka Kobus-Zawojska of Poland, but also experienced beach sprinters – Cassidy Norton of the USA, Khadija Krimi of Tunisia or Edwige Alfred of France.
The reigning World Champion in the Men’s Solo, Giovanni Ficarra of Italy, who just won a gold medal at the World Rowing Championships in Czech Republic, will look to defend his 2021 title. Competition will be fierce, with young and hungry rowers such as Christopher Bak of the USA or Benjamin Mason of New Zealand looking to leave a mark on the Welsh beach.
The World Rowing Beach Sprint Finals will also feature a Mixed Double category – with the reigning champions of Spain, Esther Briz Zamorano and Ander Martin looking to defend their title from 2021. The silver medallists from last year, Edwige Alfred and Ludovic Dubuis are looking for revenge, while it will be interesting to follow the debut of Matthew Dunham and Jackie Kiddle of New Zealand – Kiddle was the 2019 World Rowing Champion in the Lightweight Women’s Double Sculls and will also taste beach sprints internationally for the first time.
The Mixed Coxed Quad has 12 entries and once again, we could be looking at a Spain versus France rematch from last year in Portugal.
Beach Sprints are to feature at the 2023 World Beach Games in Bali, and the 2026 Youth Olympic Games in Senegal and have also been proposed as an Olympic event for 2028 to the International Olympic Committee, and at the 2026 Commonwealth Games in Australia.
The 2022 World Rowing Beach Sprint Finals will be live streamed on worldrowing.com on Saturday 15 and Sunday 16 October.