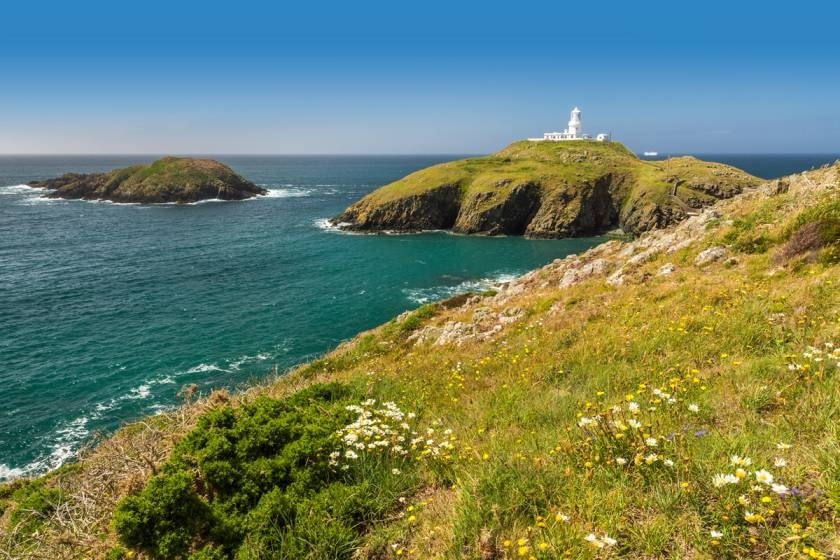 Successful coastal conservation programme serves as an inspiration to other Welsh agencies
--
A group of coastal managers from across Wales gathered at Strumble recently to learn more about nature conservation efforts on the coastal slopes of the Pembrokeshire Coast National Park and how they’ve benefitted the local chough population and other wildlife.
The event was organised as part of the Dawnsio ar y Dibyn project, which aims to promote best practice in sustainable coastal fringe management across Wales. It was attended by a range of organisations, including NRW, RPSB and Local Nature Partnerships, with participants representing both policy and practice.
One of the main topics of discussion was the practical conservation programmes carried out on the coastal slopes of Pembrokeshire, which are believed to have been instrumental in supporting the chough population in the National Park.
Jack Slattery, RSPB Conservation Officer for Eryri, Pen Llŷn and Ynys Môn, said: “Pembrokeshire is home to a quarter of choughs breeding in Wales. Recent analysis shows that the chough population is more stable in Pembrokeshire than elsewhere in North and Mid Wales. It is important that we try to understand the reasons for these differences and see if there are any lessons that we can learn from organisations involved in the conservation of coastal slopes in the Pembrokeshire Coast National Park.”
National Park Authority Ecologist Sarah Mellor, who helps to coordinate the annual survey, said: “The annual chough surveillance programme has been taking place in the National Park since 1996, and this shows the value of committing to collecting these long running datasets. We are so grateful to all those who give their time to help us with this task.”
The red-legged chough, renowned for its dazzling clifftop aeronautic displays, relies on shorter more open grasslands and coastal heaths, where it feeds on a variety of insect food. One of the key challenges for this species is the abandonment of grazing on the rougher land on the coastal slopes and cliffs, as more modern breeds of livestock are not suitable for the task.
Conservation Officer Julie Garlick was on hand to show case the work done on coastal scrub management and coastal grazing. She said: “Over the last 25 years, there has been a concerted effort from the National Park Authority, NRW (then CCW) and the National Trust to address the issues of land abandonment on the coast. During that time, large areas of the coast have been brought back into traditional management.
“The success has been down the consistency of effort throughout this period and the National Park Authority and other partners who have consistently funded this on-going work. We are now seeing the benefits in a more resilient chough population.”
Over the years, landowners around the coast have been given assistance to manage the scrub on coastal slopes and to re-instigate coastal grazing – either with their own stock, or with ponies provided through the Pembrokeshire Grazing Animals Scheme. Grants have helped managers to re-instate fencing and to provide water troughs to help with the task.
Julie added: “Habitat management for choughs also helps a range of other species, such as wildflowers and butterflies along the National Trail, as well as helping out with the management – as grazed units require less cutting. It’s a win-win all round.”
Dawnsio ar y Dibyn is funded by the Welsh Government and includes Gwynedd Council, Pembrokeshire Coast National Park Authority, RSPB, National Trust and Ceredigion Council as partners. Delivered over a two-year period, the project will focus on developing links between existing projects, initiatives and working groups to minimise the duplication of effort and showcase best practices that offer good value for money.
The Authority’s report on 15 years of Conserving the Park can be found at http://www.pembrokeshirecoast.wales/.../conserving-the-park/.

Easing the pressure on households with free broadband for six months

Ogi – Wales’s home-grown broadband company – has today announced a new broadband and voice deal, which offers its full fibre services free for six months, in a bid to help ease pressures on household bills this winter.

Neyland and Johnston GP Surgery will be run as a managed practice by Hywel Dda University Health Board, it was decided yesterday (Thursday 29 September 2022).

Primary school children from across Pembrokeshire have been invited to learn directly from local farmers where their food comes from in the first ever ‘Pembrokeshire Agricultural Society’s Food Story’ event to be held on the County Showground in Haverfordwest next month.

The 2022 World Rowing Coastal Championships and World Rowing Beach Sprint Finals get underway next week in Saundersfoot, Pembrokeshire, Great Britain. Coastal Rowing has grown in popularity in recent years and as a result, entries have been coming from all over the world – and feature again a good mix of Olympians and experienced coastal rowers.