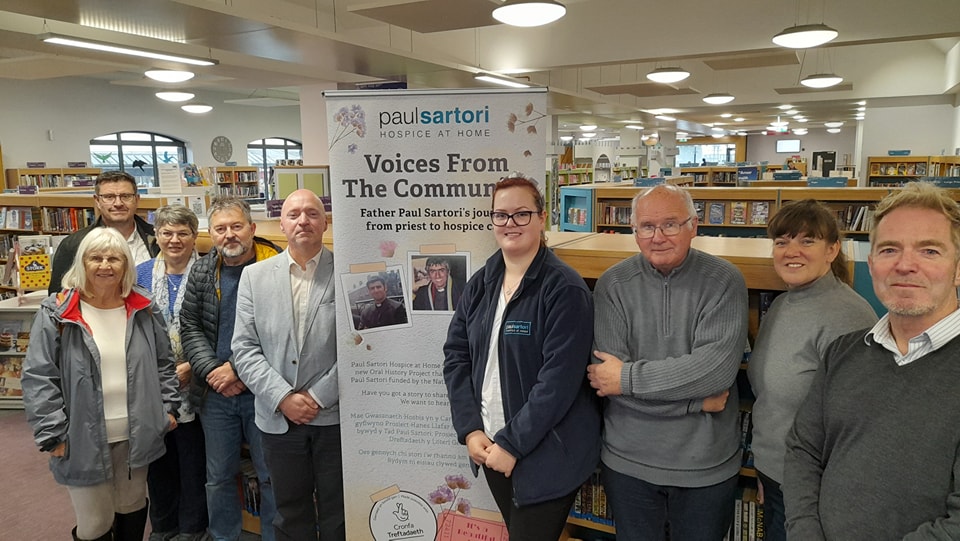 Paul Sartori charity invites public to history project meeting
--
Paul Sartori Hospice at Home is hosting a community engagement event at The Pembroke Dock Heritage Centre on Tuesday 14th February, to highlight the on-going work of its Oral History Project. The event will run from 1pm to 3pm and organisers hope for another enthusiastic response from the public, following one at the first public meeting at Haverfordwest Library in September 2022.
The project, which got underway late last year, aims to capture ‘precious memories’ of the late Father Paul Sartori.
The charity’s project officer Simon Hancock and project assistant Kiara Quimby will be on hand to tell Father Paul’s story, answer questions about the project and listen to the views of local people.
Simon explained “2022/2023 is the fortieth anniversary of the official founding of the charity and it was natural to think what the future might bring, but also to reflect on the circumstances in which the Paul Sartori Hospice at Home charity came into being. Recording and preserving the memories of those people who knew Father Paul, a highly charismatic Catholic Priest, is central to the ‘Voices from the Community’ oral history project.”
“I was delighted by the excellent response to the first of our community engagement events, held at Haverfordwest Library. People came to learn about the project, to share their memories of Father Paul Sartori and find out how they might be able to contribute.” Continued Simon.
Father Paul was a local parish Priest who identified a need for hospice care in Pembrokeshire, but died of cancer in April 1980, at the tragically early age of 39, and before his plans could be realised. Inspired by his dream, parishioners and friends formed the Paul Sartori Foundation. This Oral History Project has been made possible by funding from the Heritage Lottery Fund, but it is a race against time as the personal connection with Father Sartori could soon be lost if the interviews are not carried.
“Paul Sartori Hospice at Home have the opportunity to create a lasting legacy to him by recording interviews with people who knew him and can recount those precious memories. We want to hear all the stories, the amusing, the frivolous and the profound, and to understand the motivation of people who set up the charity and how they were inspired by Father Paul, a remarkable man, who left an indelible impression upon everyone who met him.” Said the Oral History Project team.
Those running the project would be thrilled to hear from anyone with a memory of Father Paul, or who would like to volunteer as an oral history assistant, helping with interviews. The project’s interviews, photographs and documents will be accessible to the public via the People’s Collection Wales and the Pembrokeshire Archives.
If you can provide a memory or want to volunteer, the project team can be contacted by email simon@paulsartori.org or by telephone 07796 973998
Paul Sartori Hospice at Home provides a range of services to Pembrokeshire people living in the final stages of a life-limiting illness, including home nursing care, equipment loan, complementary therapy, bereavement and counselling support, under 18’s anticipatory grief and bereavement support, physiotherapy, advance care planning and training.
The services provided by the Paul Sartori Hospice at Home enable people in the later stages of any life-limiting illness to be cared for and to die at home with dignity, independence, pain free and surrounded by those they hold most dear, if that is their wish.
All of the services are free of charge and are available 24 hours a day, 365 days a year, thanks to the generosity of the Pembrokeshire Community.
Further information on the charity and its services can be obtained by visiting their website www.paulsartori.org or by phoning 01437 763223.
Pictured are project officer Simon Hancock and project assistant Kiara Quimby either side of the display board, and the charity’s volunteer coordinator Eleanor Evans is second from right, at Paul Sartori’s first community event which was held at Haverfordwest Library in September 2022