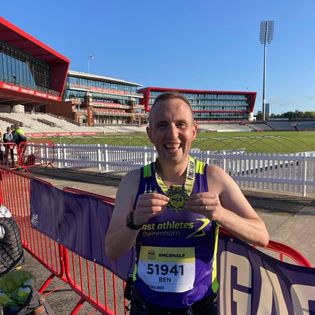 What do you do at Pure West Radio?

How did you get into radio?

I started off in the late 90s as a football reporter for a radio station called Oxygen FM which was based in Oxford. I covered Oxford United matches and did live reports from matches which great fun. The radio station was taken over by a larger group and re-named Fusion 107.9 and I stayed on, hosting a range of different shows. From then I knew I wanted to work in radio full time and lucky to work in Cheltenham, Newbury and of course, Pembrokeshire, and I stayed in the industry until 2012. I've had a break since, but the chance to return to the airwaves in 2020 with Pure West was one I couldn't turn down and I thoroughly enjoy talking sport on a Monday with Fraser and Gordon.

Where is your favourite place in Pembrokeshire?

So many to choose but the beach on Caldey Island takes some beating.

Who is your hero?

I have a few - my Grandfather who also loved Pembrokeshire, living in Saundersfoot, Templeton and Lampeter Velfrey over the years. From a broadcast point of view - Terry Wogan had the unique ability to talk directly to you as if you were the only person listening to his show. As I present the sports show on Pure West I should mention Mo Farah, Paul Gascoigne and Gary Lineker.

What is your biggest fear?

Where is your favourite place to visit in the world?

Honfleur in Normandy - one place I could keep going back to over and over again.

What would you change about yourself if you could?

What really makes you angry?

Queuing for anything. Hate it.

What motivates you to work hard?

Doing a good job and making a difference for people wherever I can.

What is your favourite thing about your life?

Any time I spend with family and friends - after the last 18 months that we've all lived through, I think I value this more now than ever.

What is your proudest accomplishment?

I love running and completiing the Virtual London Marathon in October 2021 with a PB of 3:25 is my proudest moment. That was so hard with no crowds, no closed roads and just me and my watch for company. I was so happy at the finish!

Who is the most famous person you've met?

One thing people might be surprised to know about you?

I've run over 5,500 miles since 2017 which I think would get me from Haverfordwest to somewhere in Brazil!